[Update: See PPS at the end]

OK, not exactly a pirate.

But close enough for modern times.

Jacques S. Jaikaran, M.D. was (he passed away this year) a Caribbean émigré-cum-doctor (via Leeds, England)-cum-Houston, Texas bank-board member & plastic surgeon (losing his license for issues “involving moral turpitude”)-cum-author (“Debt Virus”)–cum-US prisoner for tax-evasion & fighting for renewed Independence for the “Republic of Texas” (he tried to arrange for the “Republic of Texas” to purchase a “four-story building, similar to a compound, included machine gun turrets, a bomb shelter and a surgical operating room.”)

Perhaps because Jaikaran was a Texas author, his book ended up on display at my Dallas County Community College in 1992, where I read this interesting & informative story [this passage is from Google books with two excerpts from a physical copy]: 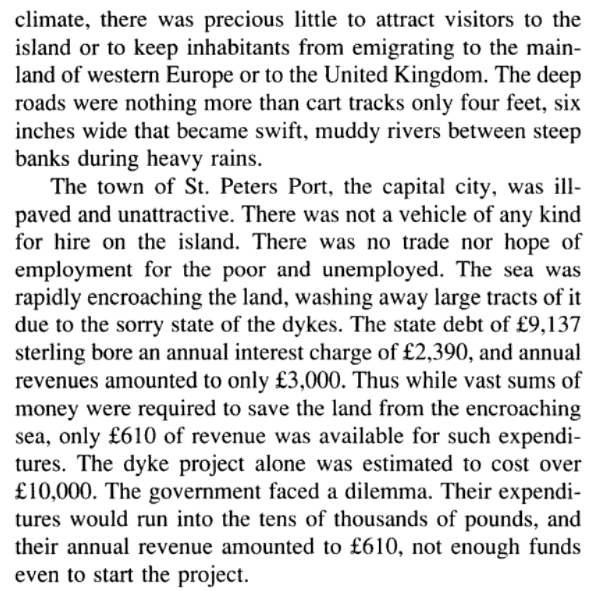 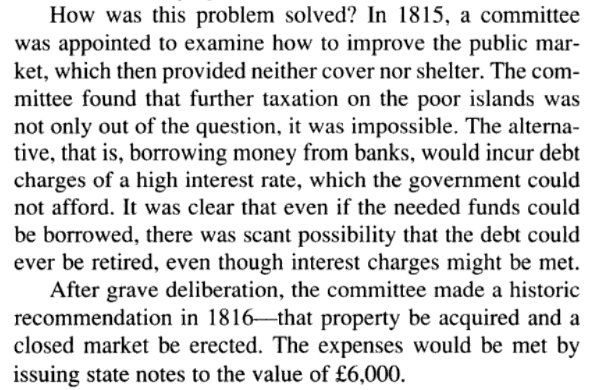 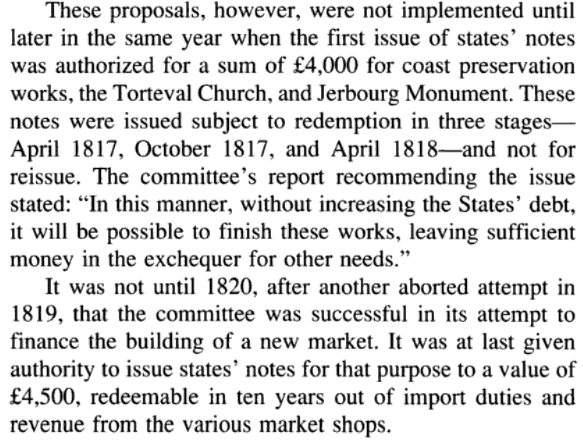 He also includes a short history of the Channel Islands worth reading. The Wikipedia entry is similar, worth a read https://en.wikipedia.org/wiki/Guernsey.

Issues regarding sovereignty and currency issuance are clear.

The opening of Jaikaran’s chapter:

For the record, Jaikaran’s views include the usual Fed-as-conspiracy type and Goldsmith-type stuff, and he didn’t understand the role of taxes. Nevertheless, considering the availability of information in the 1980s/early 90s (no Bill Mitchell blogs, no Center of the Universe blog, etc) it is not a bad attempt at seeing where mainstream economics makes no sense regarding spending, monetary operations.

I have long argued that the types of people who sense the mainstream view of “money” is wrong, yet didn’t have the good fortune to stumble across MMT at an early stage and instead end up with “goldsmith”/fractional-reserve/”we can’t pay all the interest!” views, or anti-horizontal-money type views and/or (better) aligning with Positive Money, are at least on the right track. These views can be unified (some links in the comment section here). (“Rohan Grey’s ‘Banking Under Digital Fiat Currency’ Proposal – A Guest post by Richard Taylor”)

I have been wanting to see PM and MMT unify on horizontal money for a while, nice to see this 🙂
E.g. “OMFG, MMT & Positive Money Get Along” http://clintballinger.edublogs.org/2017/11/02/omfg-mmtpm-get-along/
&
“To what extent can Positive Money and Modern Monetary Theory join forces?” https://positivemoney.org/2015/03/positive-money-versus-modern-monetary-theory/

PS Need to add this: “As soon as the £180 was received each year, 180 States’ notes were burnt…At the end of ten years not one of the notes issued to pay for the [market] was left, no interest had been paid..& there was a steady income of £180”

This makes clear where taxes go – they shrink the balance sheet.

PPS  I first heard this story through Jaikaran although it has been floating around in general. I checked for sources and (surprise surprise) found none for that chapter in Jaikaran’s book. I see now that he basically lifted it from another work – he seemed to have traveled to The Channel Islands so I thought maybe there was some original research in there…I think not though.

“This pamphlet, “How Guernsey Beat the Bankers”, is a reprint of one issued in 1958 by the Social Credit Movement. It tells how the Guernsey States from 1819-1836 manipulated the issue of notes to allow a number of public works to be carried out — including both the construction of the Guernsey Market and the rebuilding of Elizabeth College — without increasing public debt. The details are contained within the pamphlet itself….”